Remember When Podcasting Was For Geeks? 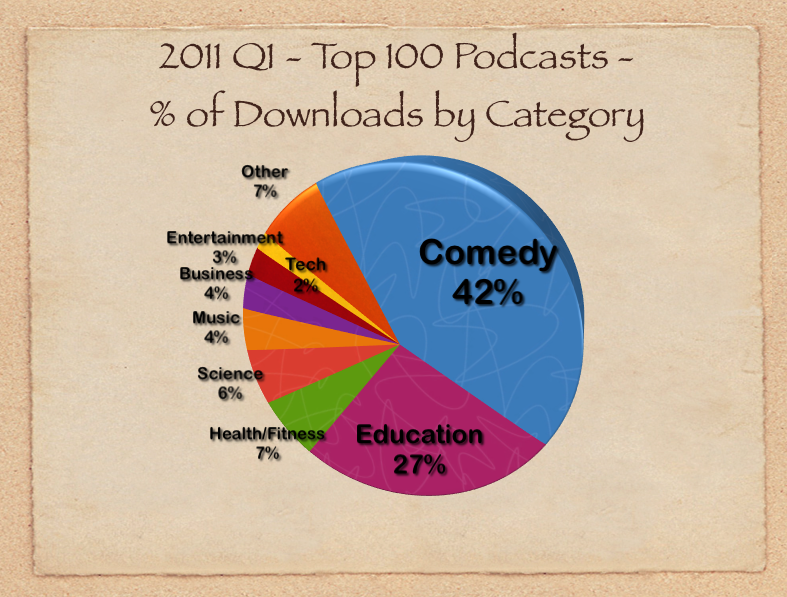 Remember when podcasting was for geeks?

When I got into podcasting the majority of podcasts that were available were technology podcasts. In fact they used to dominate the iTunes store.

It seems that we are now headed into a different era of podcasting, at least according to some of our recent data 🙂

What? Technology Podcast Are 2% of libsyn’s Top 100 Downloads?

Back in the day (2007 to be exact 😉 ) Technology podcasts were 13% of libsyn’s Top 100 Downloads. They were right up there with the 13% of Entertainment Podcasts. Comedy podcasts were 7% of the top 100 dowloads. The mac daddy of them all was the whopping 37% downloads for the Education category.

Now it seems that the podcasting tides are shifting.

According to the current 2011 data from the last 3 months…Hold on to your horses…or microphones:

I hesitate to say podcasting is becoming more “mainstream,” per say. I believe that people are becoming more tech savvy and are used to consuming the kind of content they want when then want, particularly content that they view as valuable and entertaining.

The world of TV, Film and radio is no longer in a unique power position.

Consumers have realized that if they can’t get the sort of entertainment that THEY are looking for from mainstream media, they simply have to look elsewhere for it, and podcasts are one way to consume the kind of content they long for.

High profile producers and entertainers have also recognized the power of mediums other than mainstream media to create compelling and entertaining content, podcasting being one of most popular formats being used.

Comedy is Leading the Way

Although podcasting as a whole may not be as popular as cable television, the words podcast and podcasting are more well known and recognized due to massive exposure from high profile comedians and great content. According to PopWatch “here are a few of the biggest and best out there”:

Stoked all those are hosted with libsyn 😀

The kind of press that podcasting is getting at this point and time, is more than it has ever gotten. Even Entertainment Weekly has a featured article on podcasting via Marc Maron’s WTF podcast- The June 24th issue to be exact. That sort of coverage is unparalleled and introduce podcasting to a much larger audience.

But it isn’t just about the big names…

Yes, the big names absolutely helped to grow the popularity due to the built in audience. Yes, fans are loyal. The success of these comedy podcasts isn’t * just * because these comedians are famous. The success comes from the comedians ability to take chances, get creative and produce freely.

There is something that feels raw and new about the content. THIS is what has kept fans interested plus added a ton of new fans that may not have been particularly interested in podcasting or these entertainers before.

Education is Opening The Door

One of the biggest challenges every podcaster faces is explaining how to subscribe to a podcast or even what a podcast is to newbies. Because of the newfound “fame” coming to podcasting, this job is being done for us!

The mere fact that there is more mainstream media conversation about podcasting forces descriptions and definitions of podcasting, which helps grow people’s knowledge about the medium.

Even though at this moment the popular category of Comedy is being driven by more popular names, podcasting as a whole is becoming more accesible and clearly a viable medium for self expression, brand awareness and exposure. It’s only going to become a stronger medium.

What do you podcasters think about this? Do you feel that podcasting is becoming more mainstream? Is the medium’s popularity due only to the big names coming to podcasting? Or is there more?

Leave your thoughts in the comments!

Libsyn is at BlogWorld LA! #bwela